Back to 'Books by OAs'
A Road to Extinction: Can Palaeolithic Africans survive in the Andaman Islands? by Jonathan Lawley 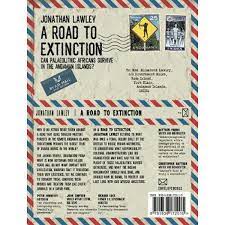 A Road to Extinction is a plea for the survival of a group of palaeolithic tribespeople who, against the odds, have managed to retain their extraordinary culture in the forests of the Andaman Islands, 400 miles off the coast of Burma in the Indian Ocean. The Andamans were taken over by the British in the late 1850s for the purpose of building a penal settlement following the Indian Mutiny, and my family was involved for several years in the islands’ administration. They now belong to India. Views of the Raj generate argument and I feel differently from most contemporary Indian historians and those whose subjects are imperialism, Indian nationalism and human rights. To rake over the past on this occasion is to miss the point, however, even if there is a case for saying that the ills of the islanders are part of Britain’s colonial legacy. The point that now needs to be addressed is that a group of islanders, whose origins can be traced back 100,000 years and who have resisted all efforts to accommodate them into modern civilization, are at risk of extinction and there is currently no meaningful plan to protect their interests, other than by doing exactly what they do not want and engaging them in development programmes and giving them handouts. Irrespective of mistakes the British may have made in the past, India has had exclusive responsibility for these tribespeople for nearly 70 years and during this time its involvement has been a complete and destructive failure. India needs to recognise the urgency of the situation and intercede, at last, to give the people the security but also the privacy that they require, encouraged if necessary by other sovereign states. Peter Hennessy (Historian): ‘An absorbing and intriguing story, beautifully presented. ‘John Simpson (World Affairs Editor, BBC News): ‘Five generations of Jonathan Lawley’s family have known and served in the Andaman Islands. Now, the Indian authorities have built an illegal road for tourists to gawp at the Jarawa, who wear no clothes and use bows and arrows to hunt. Jonathan Lawley’s account of what has happened is deeply moving and deserves our attention and our support. ‘Matthew Parris (Writer and Broadcaster):‘A book of anthropological importance, with a message pivotal to the survival of an indigenous island society on the edge of extinction, written with invaluable insight from the author’s own family history in connection with the islands. A fine balance of information and passion.’ Christopher Matthew (Writer and Broadcaster): ‘By turns astonishing and deeply troubling. Dr Lawley’s book is truly a revelation. ‘Richard Luce (Former UK Government Minister): ‘Jonathan Lawley is ideally qualified to tell the story of the Jawara tribe. His long family history in India and the Andamans, plus his own distinguished service as an Administrator in southern Africa, enables him to describe with realistic empathy the tribe’s wish to continue its unique way of life without disturbance from the rest of us. For anyone interested in the remarkable diversity of our planet, reading A Road to Extinction is a must. It is a fascinating book and I strongly recommend it.’ Hugh Tyndale-Biscoe (Former Chief Research Scientist, CSIRO): ‘In this new book Jonathan Lawley has turned his attention to the colonial service of his own family in India and the Andaman Islands, tracing the story of the islands and their aboriginal inhabitants through to the present day. It is a fascinating but sombre tale.’ John Smith (Colonial Historian): ‘A gripping mix of history, memoir and polemic about a people who have managed to avoid all that has happened to most of humanity over the last 60,000 years. Dr Lawley pleads powerfully that their wishes to remain apart be respected and makes it clear that if they are not, contact with our civilization will kill them.’ Michael Holman (Former Africa Editor, The Financial Times): ‘A compelling appeal for the world.’