Back to 'Books by OAs'
Israel The Chosen by CHARLES GARDNER (Upper 1967) Israel threatened with another holocaust. 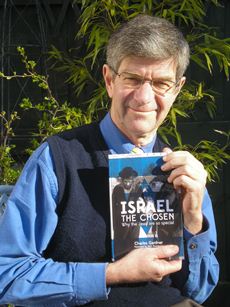 Seventy years after the wholesale massacre of six million European Jews in the gas ovens of Nazi Germany, a succeeding generation (and the nation of Israel in particular) are being threatened with another holocaust – this time from a different source – while a watching world looks the other way. This is the view of British journalist Charles Gardner (pictured) who has written a timely book offering some answers to the perplexing question of why a tiny country surrounded on all sides by hostile Arab nations is the focus of so much attention from politicians and the media. With a foreword by Hull City FC managing director Nick Thompson, Israel the Chosen (available direct from Amazon priced £6.99) emphasises the Jewish roots of Christianity and offers a strong defence of Israel’s position in the world. Gardner warns that his conclusions may be too unpalatable for a politically-correct world to accept, but that they deserve to be taken seriously.The 63-year-old Cape Town-born author who was educated at St Andrew’s College, Grahamstown, and now lives in the north of England, has worked in the newspaper industry for 40 years, having recently taken early retirement from South Yorkshire Newspapers, for whom he worked as sports editor of the Selby Times for the past 15 years. He was also a finalist for Premier Radio’s new media awards while editing the online newspaper www.lifebite.co.uk from 2008-10. Part-Jewish, he grew up in South Africa and became a fully committed Christian as a young man living in London where he worked as a Fleet Street correspondent for the South African Press Association before moving to Yorkshire in 1979. He has since worked in Sheffield, Wakefield, Castleford, Doncaster, Goole and Selby, and was editor for eight years of the Hemsworth & South Elmsall Express. He is currently working on plans to launch a new UK national newspaper reporting and interpreting the news from a biblical perspective. With four children and seven grandchildren, he is married to Linda, 55, who takes the Christian message around dozens of schools in Doncaster through RE lessons, assemblies and various other projects.