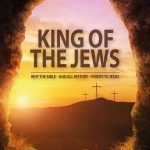 The publishing this year of King of the Jews (Christian Publications International), my fourth book on Israel in seven years, is the product of a combination of influences in my life including my time at College. Though mainly borne out of my Christian faith, it also builds on my fascination with history (thanks to the inspired teaching of Jannie Breytenbach) and politics.

I have a clear memory of the day in June 1967 – in the Upper House common room – when I read, in the Eastern Province Herald, the dramatic news of Israel’s victory in the Six-Day War amid pictures of soldiers rejoicing that the holy sites were in their hands for the first time in nearly 2,000 years. I somehow knew it was highly significant.

Although I am part-Jewish, there is a sense in which all Christians have Jewish heritage since the Bible says that, by faith in the Jewish Messiah, we are “grafted in” to the natural olive tree that is Israel. My book demonstrates how Jesus is the complete fulfilment of the Jewish Tanakh (what we call the Old Testament) and ponders the significance of what that means for both Jews and Gentiles.