Back to 'Books by OAs'
Rewilding Africa: Restoring the Wilderness on a War-ravaged Continent by Grant Fowlds and Graham Spence 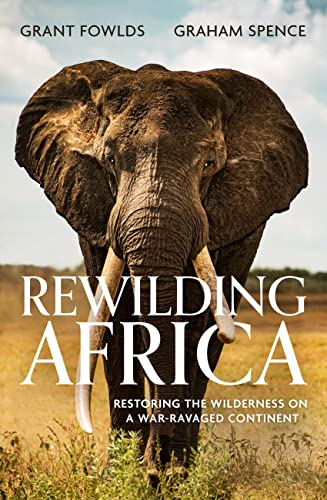 Conservationist Grant Fowlds lives to save and protect Africa’s rhinos, elephants and other iconic wildlife, to preserve their habitats, to increase their range and bring back the animals where they have been decimated by decades of war, as in Angola, Mozambique and the Democratic Republic of the Congo.

This vivid account of his work tells of a fellow conservationist tragically killed by the elephants he was seeking to save and a face-off with poachers, impoverished rural people exploited by rapacious local businessmen.

Fowlds describes the impact of the Covid pandemic on conservation efforts, the vital wildlife tourism that sustains these and rural communities; and tells of conservationists’ efforts to support people through the crisis. Lockdowns may have brought a welcome lull in rhino and other poaching, but also brought precious tourism to a standstill.

He shows how the pandemic has highlighted the danger to the world of the illicit trade in endangered wildlife, some of it sold in ‘wet markets’, where pathogens incubate and spread.

He describes a restoration project of apartheid-era, ex-South African soldiers seeking to make reparations in Angola, engulfed for many years in a profoundly damaging civil war, which drew in outside forces, from Cuba, Russia and South Africa, with a catastophic impact on that country’s wildlife.

Those who fund conservation, whether in the US, Zambia or South Africa itself, are of vital importance to efforts to conserve and rewild: some supposed angel-investors turn out to be not what they had appeared, some are thwarted in their efforts, but others are open-hearted and generous in the extreme, which makes their sudden, unexpected death an even greater tragedy. A passionate desire to conserve nature has also brought conservationists previously active in far-off Venezuela to southern Africa.

Fowlds describes fraught meetings to negotiate the coexistence of wildlife and rural communities. There are vivid accounts of the skilled and dangerous work of using helicopters to keep wildebeest, carrying disease, and cattle apart, and to keep elephants from damaging communal land and eating crops such as sugar cane.

He tells of a project to restore Africa’s previously vast herds of elephants, particularly the famed ‘tuskers’, with their unusually large tusks, once prized and hunted almost to extinction. The range expansion that this entails is key to enabling Africa’s iconic wildlife to survive, to preserving its wilderness and, in turn, helping humankind to survive.

There is a heartening look at conservation efforts in Mozambique, a country scarred by years of war, which are starting to bear fruit, though just as a new ISIS insurgency creates havoc in the north of the country.

What will humanity’s relationship with nature be post-pandemic? Will we have begun to learn that by conserving iconic wildlife and their habitats we help to preserve and restore precious pockets of wilderness, which are so vital not only the survival of wildlife, but to our own survival on our one precious planet.