Back to 'Books by OAs'
Saving the Last Rhinos: The Life of a Frontline Conservationist by Grant Fowlds & Graham Spence 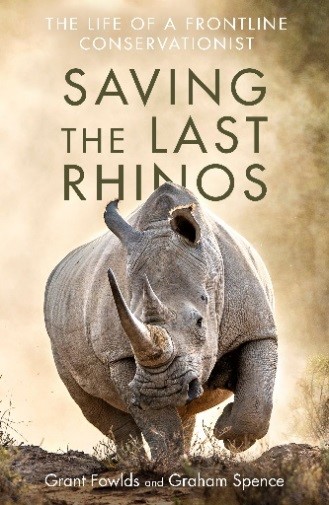 ‘Endangered means we still have time, but extinction is forever’– Grant FowldsIn 2016 the number of rhinos poached in South Africa stood at 1,054 (Department of Environmental Affairs). In 2017, 529 rhinos had been slaughtered by 24th July. In the last nine years, over 6,100 rhinos have been poached in South Africa leaving fewer than 19,000 white, and 2,000 black rhinos in the country. The situation is critical. Grant Fowlds is a passionate conservationist who puts himself in the front line, on the ground, where it matters. He is deeply focused on highlighting the vast increase in rhino poaching, a scourge which has placed these mighty animals under serious threat of extinction. He is a partner of Rhino Art with the founder, philanthropic adventurer, Kingsley Holgate. Rhino Art – ‘Let the children’s voices be heard’ – Project’s aim is to gather the largest number of children’s ‘Art Voices’ ever recorded, in support of Rhino Protection, and to use these ‘Hearts and Minds’ messages from the children of Africa as a worldwide call to action against rhino poaching. On a broader level he works closely with all of the biggest global and local conservation agencies, including WWF.