Back to 'Books by OAs'
The Prayer of Moses: The Moses Formula by FRED C H LOVEMORE (Espin, 1947) 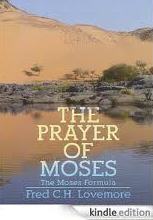 We have been warned! The tribulation predicted by Jesus is upon us. Moses, directed by God, wrote: “Thou shalt have no other gods before me”. But for untold generations, mankind has placed its pursuit of health, wealth, and happiness before God. Consequently, he now finds himself in a world of escalating chaos, violence and fear, cornered against a “Red Sea” of his own making. But Moses, inspired by God, gave mankind the formula for one of the greatest prayers ever devised, a prayer (where prayer is the attaining of a state of mind or level of consciousness), which saved the Israelites at the Red Sea from possible annihilation by the Egyptians. Egypt symbolises materialism which today blinds man to his greatest heritage, namely, the awareness of his creation in the image and likeness of God, and with it his eternal oneness with the Father. We have been warned! We either heed the warning by having no “gods” before God or face the dire consequences of the end times described by Jesus. What can we do to help ourselves during these end times? We can study the Moses Formula, pray as it directs and return to worshipping God.

To purchase a copy, contact direct.sales@onthedot.co.za or jean@feathercommunications.co.za or phones 0861668368 and 021 918 8811. For readers outside Africa, the book is available on Amazon.com.