The Mullins House Squash Court opened for play during the Trinity Term of 1971. The Court was donated to College by the parents of two boys who were attending St Andrew’s at the time, Michael Beaumont (Mullins 1969-73) and Christopher Rance (Armstrong 1970-73). The Squash report in The Andrean by Mr DP Hodgson (OA 1946-49), Master-in-Charge of Squash, spoke of how the addition of the new court relieved pressure on the existing school squash courts, stating that it was of “considerable benefit to the great number of boys who play this game at the School.”

After leaving St Andrew’s with a 1st Class Matric, Alan studied Electrical Engineering at the University of the Witwatersrand, where he was a member of the University Underwater Club. On 3 May 1979, three days after his 21st birthday, Alan died as the result of a shark attack while diving in KwaZulu-Natal with the Wits Underwater Club.

Alan was remembered for his great determination to achieve the goals he set for himself. Alan’s Housemaster, Mr John Axe, motivated the building of the wall. Mr Axe believed that a memorial should both commemorate and inspire. Fittingly, the wall’s citation contains the following quote:

“Men of the future, as you read this Text think not of death – but remember – when death comes there will be no finer epitaph than, ‘I did my best.’” 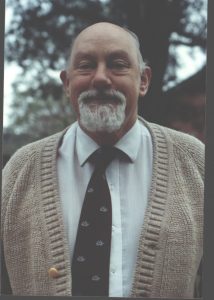 Most of the St Andrew’s College community today will be familiar with the name ‘John Axe’ from the annual John Axe Arts Week. The Arts Week was named after Mr J. R. Axe, Honorary Old Andrean, who gave 34 years of service to College as a member of staff.

Mr Axe arrived at College in 1963 as an English teacher. From 1971 to 1972 he was in charge of Holland House and Deputy Housemaster of Mullins House. In 1973 he was appointed as the 6th Housemaster of Mullins House. Much of the success of his housemastership was attributed not only to Mr Axe himself, but also to the support of his wife, Mrs Gwen Axe (Honorary OA). Mrs Axe was the Caterer of Mullins House, and the boys greatly appreciated her presence and the effort she put into the House. Many Old Andreans will also remember her from her role as Wardrobe Mistress for College drama productions over three decades, during which time she made hundreds of costumes for boys taking part in plays.

The Axes left Mullins at the end of 1984 after completing 12 years in the House, which in those days was the maximum period that Housemasters were allowed to serve at College. The College Headmaster, Mr Arthur Cotton (Honorary OA), paid tribute to Mr Axe’s service to Mullins House at Speech Day in October 1984 as follows:

“John’s housemastership has been characterised by a determination that work should be taken very seriously and that, in addition, the members of the House should lead a balanced life. He has been prepared to spend an immense amount of time counselling boys. In addition, many have derived the benefit of some of his more forthright comments and his sense of humour. Speaking personally, may I say how much I have appreciated John’s contributions to our deliberations on the Housemaster’s Committee. He has always been prepared to address the thorny issues and persist until we have reached a satisfactory conclusion.”

Axe and Cotton had been school friends when they attended Michaelhouse together.

There can surely be little doubt that John Axe was one of the legendary masters at St Andrew’s who have given so much to the school. During his time at College he was Master in Charge of Drama, Hockey and Fives. He was the Second Master from 1993 until 1996, when he retired. One of the things for which he is remembered most is as a legendary English teacher, a Shakespeare expert, and for the dozens of plays he put on over his years at College. The Axe’s youngest child, Barry John Axe (OA 1988), was a member of Mullins House from 1985 to 1988.

Sadly, Mr Axe passed away in 1999, only two and a half years into his retirement and aged just 63. His legacy is still tangibly felt at College today, and he is remembered fondly by those whom he knew and taught.

The year 1971 marked the 50th anniversary of Mullins as the fifth House at St Andrew’s College.

The anniversary was celebrated with a House Dance. At the House Supper a special toast was said.

Also in 1971, a table tennis table was made and given to the house by Mr Richard Child (M, 1966-70), who had matriculated the previous year.

In the entire history of College, not many Old Andreans have been awarded Honorary Degrees. Dr William Bleloch (Mullins 1921-23) is one of them. He arrived at St Andrew’s in 1921 as one of the original members of Mullins House. In 1975 the University of the Witwatersrand conferred on him the degree of Doctor of Science in Engineering, honoris causa. The citation commented as follows:

“William Bleloch can truly be called the father of our electrochemical and electrometallurgical industries, the importance of which to our economy and the welfare of our people can scarcely be overstated.”

Dr Bleloch later received the Brigadier Award in 1981 from the South African Institute of Mining and Metallurgy for the highest achievement in that industry. This award was giving for his pioneering South Africa’s production of large-scale organic materials.

On the occasion of South Africa’s first ever television broadcast in 1975, the first face seen and the first voice heard belonged to Mr David Hall-Green (Mullins 1952-55). David is a highly successful television present, radio broadcaster, actor, and a notable artist.

Mullins House was opened in 1921, with Mr Arthur ‘Foxy’ Knowling OBE as its first Housemaster. It was considered very smart and comfortable, not only because of the elegance of its design but also because it had running water and electric lights from the start! It is named after Canon R.J. Mullins and his son Charles, who received the Victoria Cross in the South African War.

Situated some distance from the centre of the campus, it is known as ‘The Republic of Mullins’, characterised by its own special practices and a spirit of independence. Mullins House was the only house to have its own dining-room inside the house. With the opening of the central Dining Hall Complex in 2012, however, this room has now been converted into a big, specious recreation room. Mullins House even has its own flagpole on which the national flag flies daily.  Each Mullins boy has the privilege of hoisting the ‘house flag’ on his birthday.

You will notice in the 1930 photo of Mullins House, that there is a Fives court next door to the main Mullins building, and serious games used to be played between boys, masters and Rhodes students – especially during the 1940s and 1950s. Today the Mullins boys play Venkatesh cricket on the old Fives court, a game of their own invention.