Mr John Jones (Honorary OA) was the 7th Housemaster of Mullins House for a period of 10 years from 1985 to 1994. Most of the College and DSG community will recognise his name from the John Jones Fish River Journey. Mr Jones was responsible for establishing the Fish River Journey, and upon his retirement in 2006 the Journey was officially named after him, in his honour. 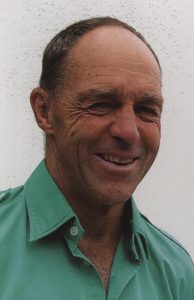 Mr Jones arrived at College in 1983 and was a member of staff for more than 23 years until he retired in April 2006. Over these years he was Head of the Geography Department, Housemaster of Mullins House, Senior Housemaster, Chairman of the Games Committee, Senior Assistant Master, and Acting Deputy Headmaster. He was Master in Charge of Rugby, Squash, Triathlon/Biathlon, Canoeing, and 1st XV coach, and he played a significant role in the Jubilee 150 Planning Committee. He undertook the sports research for the years 1956 – 2005 for Marguerite Poland’s biography of St Andrew’s College, The Boy in You. He did so much more for College in addition to this list. Therefore, Mr Jones is most certainly another legendary schoolmaster to which Mullins House can lay claim.